Why financial planning is important 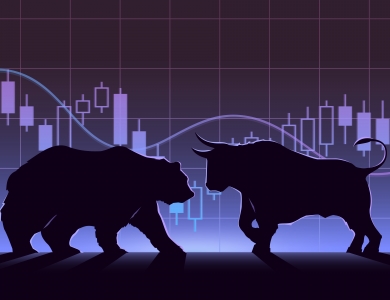 Bear or Bull?……Crash or Correction?

Neither is an animal you’d want to run into on a hike, but the market has picked the bear as the true symbol of fear: A bear market means stock prices are falling — thresholds vary, but generally to the tune of 20% or more — across several of the indexes referenced earlier.

It came out of the Great Recession, however, and that’s how bulls and bears tend to go: Bull markets are followed by bear markets, and vice versa, with both often signaling the start of larger economic patterns. In other words, a bull market typically means investors are confident, which indicates economic growth. A bear market shows investors are pulling back, indicating the economy may do so as well.

Bull markets are followed by bear markets, and vice versa, with both often signaling the start of larger economic patterns.

The good news is that the average bull market far outlasts the average bear market, which is why over the long term you can grow your money by investing in stocks.

The S&P 500, which holds around 500 of the largest stocks in the U.S., has historically returned an average of around 7% annually, when you factor in reinvested dividends and adjust for inflation. That means if you invested $1,000 30 years ago, you could have around $7,600 today.

A stock market correction happens when the stock market drops by 10% or more. A stock market crash is a sudden, very sharp drop in stock prices, like in October 1987 when stocks plunged 23% in a single day.

While crashes can herald a bear market, remember what we mentioned above: Most bull markets last longer than bear markets — which means stock markets tend to rise in value over time.